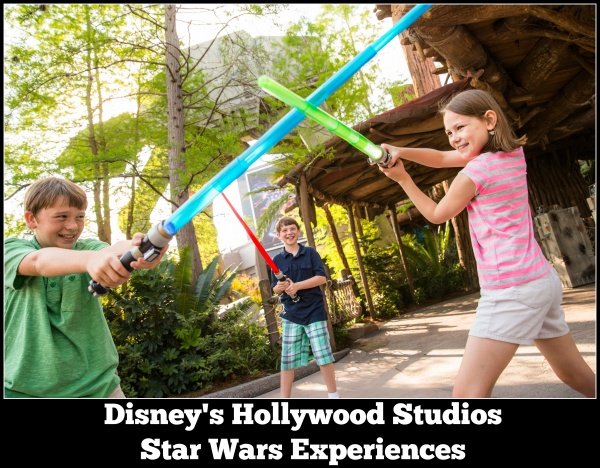 Starting December 1, Guests will be able to enjoy more at Disney’s Hollywood Studios Star Wars experiences every day.  Check out some of the ways you can feel the Force!
• Star Tours: The Adventures Continue will feature a new scene inspired by the upcoming film, Star Wars: The Force Awakens. During the opening months, everyone who rides Star Tours will experience the new adventure. After that, it will be up to the will of the Force.
• Star Wars Launch Bay will take Guests into the Star Wars saga and the upcoming film, Star Wars: The Force Awakens, with special exhibits and peeks behind-the-scenes, special merchandise, and opportunities to encounter Chewbacca and Darth Vader. Disney’s Hollywood Studios Star Wars Experiences are always enhanced with some great merchandise!
• “Star Wars: Path of the Jedi” will feature scenes from the complete Star Wars saga, also giving anyone new to the Star Wars galaxy an opportunity to get acquainted with the films. Star Wars: Path of the Jedi” will be running at ABC Sound Studio.
• By early December, Jedi Training: Trials of the Temple will take younglings to the secret site of an ancient Jedi temple where they will face Darth Vader along with the Seventh Sister – a new villain from the Disney XD series “Star Wars Rebels.”
Because of construction starting on the new Star Wars-themed land next year, Star Wars Weekends will not be offered in 2016.

Want to feel the Force for yourself?  Contact one of the expert vacation planners at The Magic for Less Travel and make plans to enjoy all these Disney’s Hollywood Studios Star Wars Experiences.  The Magic for Less Travel specializes in vacations to magical destinations and is an Authorized Disney Vacation Planner.  They can help you get the most from your Disney vacation.