This was my first, and hopefully not last, FAM/AEP. I have been wanting to do one of these for many years but the timing was never right. Then the owners of The Magic For Less Travel, set this trip up for their agents so we can learn about each other and about the destinations we sell. So, it was on!

For those not familiar with the terms FAM or AEP, a FAM is a familiarization trip offered by certain travel vendors to travel agents so we can become more familiar with their location. An AEP stands for Agent Education Program and it is a lot like a FAM but with more training.

Since the Universal FAM was first, I went down the night before. The whole trip started off on a rough foot. First it was having to get to the airport before sunrise. Then missing the turnoff for the parking garage and having to park in the far back of the outside lot. Then, the long, long, yes long walk to the Southwest check in desk. But once I got through security and to my gate, things went better. The flight was completely full and we flew down in overcast skies but the magic started as soon as I got to the Orlando airport.

I had booked a tower family suite room at Universal’s Cabana Bay Beach Resort. I also had set up the new SuperStar Shuttle service from the Orlando airport to my Universal Resort. So when I got off the plane, I headed for the Universal Store in the terminal. Check in at the concierge desk was quick and I was given a great travel wallet that included maps, my itinerary and much more. Then it was a quick stop to grab my luggage and on to the shuttle. The shuttle left quickly, was air conditioned and was running a Minion movie on the TV. 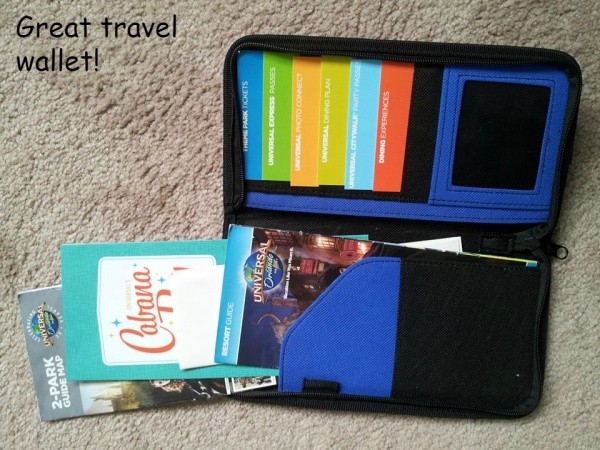 We arrived at Cabana Bay Beach Resort and I checked in. The room was not ready yet but I did receive the text in about 30 minutes. After dropping off my luggage, my roommate for the night, another Magic For Less agent, arrived. We grabbed some lunch at the Bayliner Diner and then we headed for the parks. She went to Disney, I went to Universal Studios. I used the Resort to park bus. This was very convenient!

It was starting to rain so I jumped in line for The Mummy. Love this ride! I had a couple of young guys in the front with me and they were laughing and having a ball. After this ride it was raining very hard so I put on my poncho and explored Diagon Alley and the Simpsons area. By this time I had walked through so many puddles my feet were soaked. So I headed back to the resort shuttle bus and my room. After changing shoes, I went exploring around the Cabana Bay Beach Resort and grabbed a Cabana Bay Burger from Bayliner Diner. They put it into this nice box for me to carry back to the room.

Then it was time to put in a few hours at work and then to bed.

The next day started the Universal Studios Florida FAM trip! We checked into the Portofino Bay Hotel and did some product training. Then it was off to explore the Hard Rock Hotel, Cabana Bay Beach Resort and the Royal Pacific Resort. Love the Minion family suites!

We were then taken to Lombard’s Seafood Grille for the Cinematic Spectular Dining Experience and the Cinematic Spectular Show. This is a definite highlight! Don’t miss it! The following day we went into the parks early and had breakfast at the Three Broomsticks in Hogsmeade, Islands of Adventure. We had the VIP tour that took us to many of the most popular rides like: Harry Potter and the Forbidden Journey, The Amazing Adventures of Spiderman, Jurassic Park River Adventure, Hogwarts Express to Universal Studios Florida, Gringotts Bank Ride, E.T Adventure, Transformers and Despicable Me to name a few. The VIP tours are well worth the cost, giving you a guided and informative tour of one or both parks with priority entrance into many rides!

Then we had a great dinner in Citywalk at Vivo Italian Kitchen. Then back to the Resort to work.

The next day we moved over to the Disney Grand Floridian at Disney World. We had a catered lunch and some training and then it was off to see Disney’s Caribbean Beach Resort. We checked out the refurbished rooms with the pull down bunk bed for the 5th guests and the themed Pirate rooms.

Then it was off to Disney Springs where we got a glimpse of the new happenings, restaurants, stores and more. As a ‘Florida cracker’ myself, I was very interested in the backstory for this new development. We have a wonderful dinner at the new Boathouse, watching the Amphicars as we had great food, great conversation and an amazing Baked Alaska desert.

The next day was filled with Resort tours of the Disney Grand Floridian, Grand Floridian Villas, Polynesian Village Bungalows, Board Walk Inn Resort and more. Then back for more training before we were whisked off to Disney’s Animal Kingdom for a preview of the nighttime Kilimanjaro Safari, updates on the upcoming Pandora, Avatar area and an outdoor buffet.

The next day started with learning about some great new culinary offerings at the Disney Contemporary Resort, including an interactive experience with the chefs and a private dining room/chef’s table experience. Following a wonderful meal in the California Grill we were sent off on a Disney VIP tour. https://disneyworld.disney.go.com/events-tours/vip-tour-services/ We had a great tour guide who took us backstage into the Magic Kingdom where we had priority entry into Buzz Lightyear’s Space Ranger Spin, Seven Dwarfs Mine Train, Peter Pan’s Flight, The Haunted Mansion and the Jungle Cruise before we headed to Epcot. We enjoyed a brief rest and very tasty margarita at La Cava del Tequila before heading to Soaring. We all met up for a delicious dinner before we went on Test Track.

The last day was filled with more training before the AEP was over. 🙁

I spent the night at Disney’s All Star Movies and visited the Magic Kingdom again. Before I left the next day I managed to get to both Disney’s Animal Kingdom and Disney’s Hollywood Studios.

Again, I was amazed at the details and theming of the different Disney Resorts. Magic!

I know there are things I have not noted as I have not had a chance to read through all my notes and information that was given to us at both the Universal FAM and Disney AEP. I enjoyed meeting a lot of the other Magic For Less Travel agents. It felt more like a family reunion than a work meeting.

I look forward to the next time!

Born about 2 hours from Orlando, I have been visiting Disney World since 1972. I became a travel agent so I can help others experience the magic! https://www.themagicforless.com/affiliates/link.shtml?affiliate=TMFL-TMFLTinaC View all posts by Tina Saunders