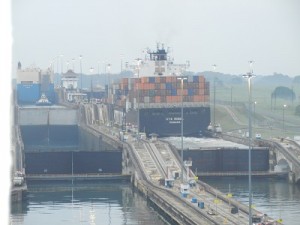 The Panama Canal is one location on a lot of people’s bucket lists, and rightly so.  It’s an exciting thing to see, especially after you know something about how it’s all done.

The canal operates 24/7, but of course cruisers pay to actually see the canal, so the cruise ships are assigned a transit time and arrive about 10pm the night prior to then  anchor in a holding area along with many other ships so they can go through during the day.  About 40 ships do the transit each day.  The larger ships go in the morning with the smaller ones later in the day.  If they get in to the Gatun Lake while there’s still a wait to go though they may tie up or anchor there for a few hours to rest while waiting.

The largest ships that can go through the canal are Panamax ships.  The maximum size would be 106 ft. beam, 110 ft. wide with a 39.5 ft. draft.  You have to be careful with the draft as it differs from salt to fresh water, and since the ships are usually in salt water but the canals are fresh water they have to know the difference of what it will be.  Ships go in very low on fuel so they can have more cargo with less draft.  The Disney Wonder has a 965 ft. beam, 106 ft. wide and 25-25 ft. draft.    Each vessel pays to go through the canal, depending on the type of ship, cargo and tonnage as well as surcharges and a 10% priority transit fee.   The fees must be paid 96 hours prior to transit and documents provided stating the ship is free pratique (no disease).  Although Disney won’t confirm figures it’s probably over the estimated tolls of $351,485 for us to do the transit (the Disney Magic paid $331,200 when they went through).   The highest paid toll was $375,600 by the Norwegian Pearl and the lowest 36 cents by the only person that swam though the canal by measuring him (not allowed now). 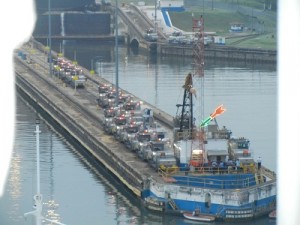 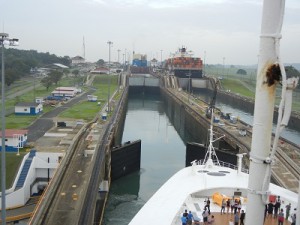 The total canal is 54 miles with the 19-mile long Gatun Lake in the center.  The transit takes between 8-10 hours from the Atlantic to Pacific Oceans, 3 of which are going across the lakes (Gatun then a smaller lake).  There is no current on the Atlantic side making it much easier to transit going west.  Each lock lowers/fills in 9 minutes with 52 million gallons of fresh water per lock.  Getting through the locks the ship uses its own power, but has locomotives called mules on each side to keep it centered as there was only 2 feet between the ship and sides.   The Disney Wonder had 4 on each side. Coming from the Atlantic you’ll go through 3 locks before you get to Gatun Lake. In Gatun Lake you cruise for 2 hours and you’ll pass markers designating the Continental Divide, which is where the water starts flowing in opposite directions (east to west).  You then go through 1 lock getting into a smaller lake, go 30 minutes, then down last 2 locks to the Pacific Ocean.  At this point they have a strong current due to the fresh water and salt water mixing.  There is no current coming from the Atlantic side. 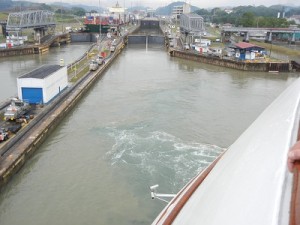 We were able to see the new canals being built that will accommodate larger ships, which they hope to have open in the near future.  This will help with the larger cruise ships as well as freight carriers.  Just by going through the canal rather than around Cape Horn they save 7872 miles between New York and San Francisco, so even with the high fees it certainly was worth the expense for them to build it.

If you ever have the time, I highly recommend doing a cruise through the Panama Canal.  It exceeded my expectations and I’m so thankful I had the opportunity to do this.