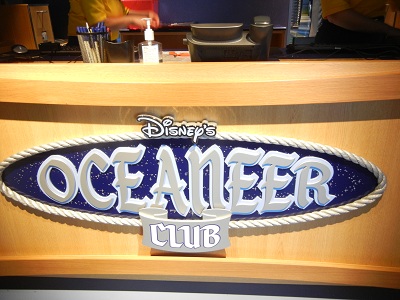 Disney’s Oceaneer Club is a children’s activity center located on Deck 5, Midship on the Disney Fantasy.  It is the ideal place for children 3 to 12 years of age to immerse themselves in the imaginative worlds that Disney is known for, while performing on stage, playing games and enjoying a wide variety of supervised activities.

The central rotunda is the main gathering place and, at the same time, a portal to other “lands,” including:

This welcoming environment for children features twinkling constellations of Disney characters on the ceiling—as well as sparkling “pixie dust.” The room’s focal point is a stage area where kids can star in their own theatrical plays, join storytelling sessions and attend special visits by Disney characters, both in person and virtually.

The rotunda also has a 103-inch plasma screen for watching movies and for magical interactions with Crush, the totally tubular sea turtle from the Disney•Pixar movie Finding Nemo. The turtle personally chats with kids during his real-time animated appearances, asking them about themselves and the human world they inhabit.

What makes Disney’s Oceaneer Club even more magical is an endless supply of toys and games, an open seating area for arts and crafts, and ongoing Disney movies. Mats for naps are also available.

Children are invited to enjoy lunch and dinner at Disney’s Oceaneer Club.

Children ages 3-12 with special needs are welcome at Disney’s Oceaneer Club. Simply let the counselors know in advance and they will accommodate the best they can.

Children are invited to partake in a wide range of delightfully themed activities available at Disney’s Oceaneer Club. While some activities are recommended for certain age ranges, participation is based on a child’s interest level and maturity—not age. As a result of this, siblings and friends ages 3-12 can play together without restriction.

Open House is an opportunity for all guests to come and participate in a variety of exciting activities in the Oceaneer Club and Lab throughout the cruise. During these times the Oceaneer Club or Oceaneer Lab will still be available for those looking to check their children into care.