Most amusement parks and theme parks have locker storage available at the front of the parks for guests to store their belongings.  So we found it odd to see sets of lockers near the rides at Universal Studios Orlando’s two amusement parks.  They seemed to be everywhere and we soon learned they were everywhere for a purpose! 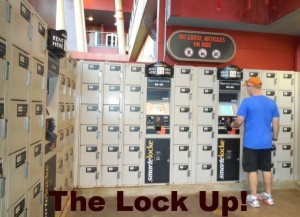 At Universal Studios, you are required to place all backpacks, purses and loose items in a locker prior to boarding the following rides: 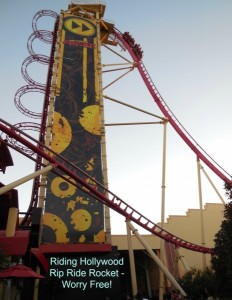 At first, there was reluctance on our part to embrace this system.  I did not like the idea of putting my backpack and all of its contents in a locker.  Would it be secure?  What if someone else figured out a way to get into the locker? Secondly, we thought it would be too time consuming to stop and store the required items! We found both concerns to be unfounded after our initial use of the lockers!

At the rides, you’ll be directed to a locker storage area.  You step up to a kiosk at the lockers and follow the prompts on the screen. At the kiosk you will be assigned a locker to store your belongings, head to the locker and store your items.  It’s that simple and a Universal Studios employee monitors each set of lockers to answer questions or resolve any problems and we actually had a problem!

After exiting a ride, our locker would not open.  We entered the pin we had used to secure the locker but it failed to open.  We found the attendant; who first asked us, “Are you sure this is your locker?”  He informed us this is the most common mistake guests will make when returning to the lockers after exiting the ride.  Alas, it was the correct locker.  He then asked us to describe what was in the locker, which we did.  He then opened the locker, asked us to retrieve the backpack and produce a photo ID.  Which we did.  He bid us a good day and we went on our way! It was as easy as that. 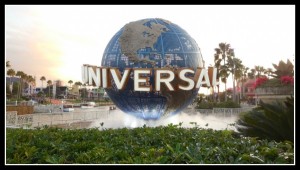 The lockers do have a time limit and if you exceed the time limit, you will be charged a fee.  The fees are posted at the lockers. We found the system to be efficient and so easy to use and bonus – we didn’t worry about losing anything while riding the rides!

Published by Tim and Audie Lawley

Venturing to new places, embracing new cultures and stepping outside of our daily box is the gift we give ourselves when we travel. Combining our passion for travel and a love of serving others, we will diligently work to provide you with a unique and memorable travel experience. We have extensive personal travel experience and love to share that experience in planning for our clients trips! We've visited 17 different countries, 26 different US states and have cruised more than a dozen times! We've traveled by train, planes, bus and automobiles. Basically...we love to travel! Disney travel holds a special place in our hearts and is our favorite travel experience. Disney knows how to magically transport families to a place where hectic schedules, busy lives and every day routines are replaced with amazing experiences, travel adventures and memories that will withstand the test of time. We are proud to be College of Disney Knowledge Graduates and have traveled with Disney extensively. We are also trained specialist with Royal Caribbean Cruise Line, Princess Cruise Line, Norwegian Cruise Line, Carnival Cruise Line and Sandals & Beaches Resorts. Whether looking for an intimate getaway, a group vacation or a multi-generational trip of a lifetime; you can consider us, your personal shoppers as you experience the gift of travel! View all posts by Tim and Audie Lawley