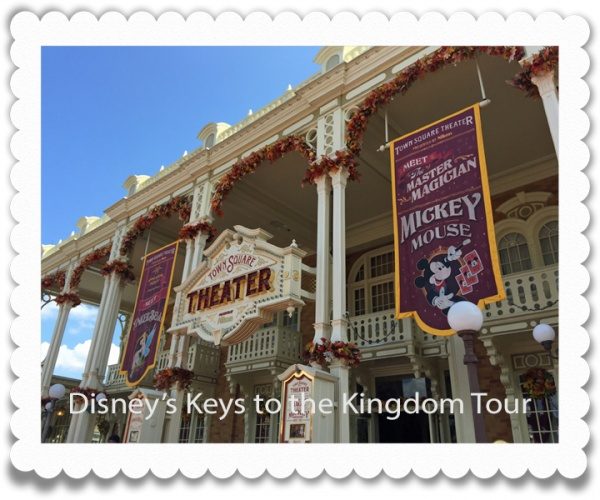 As you may know, Walt Disney World offers various tours for an additional fee (on top of park admission fees). My husband and I decided that our first tour should be the Keys to the Kingdom. This tour takes place inside the Magic Kingdom and is a 6 hour walking tour of the park including a couple of the most famous attractions and does include a lunch break.

The tour starts at the Town Square Theater on Main Street. You check in at the desk and you will receive your headset and name tags and await your tour guide. You will also receive your “key” to the kingdom!!!

The walk starts on Main Street and follows through counter counterclockwise through Adventureland, Frontierland, Fantasyland and Tomorrowland, ending once again at the Town Square Theater on Main Street. The story that is explained as you walk include the “4 Keys” that are the basis for everything that happens in the Disney Parks. These 4 Keys in order are:

The tour guide will explain that even before you entered the park to meet at the theater, the ‘show’ had started. You must see and walk under the train station to get onto Main Street, and you will notice that you can’t see the castle until you are ON Main Street. The train station is considered the “curtain” to the show, and the park is the show. Each individual land has it’s own story with it’s own “curtain”.

When you leave Adventureland, you will walk through Frontierland. You will see addresses on the buildings. These addresses are actually telling you the year that that particular building is depicting. So you see the Hall of Presidents is 1787 and then the Country Bear Jamboree is 1898. You can follow along and see as you walk through Frontierland to Liberty Square, the addresses get lower doing back further in history.

Another stop on the tour is a trip through the Haunted Mansion! Some of the secrets are explained here as well, but I don’t want to give too much away! You will have to try the tour for yourself and see what you think!

Your stop in Fantasyland includes a history of the castle as well as the exciting behind the scenes Utilidors visit! I’m not telling where the entrance is…! This was a very exciting part of the tour, so see the underground hallways, and to see some of the princesses walking by. The Disney Cast Members area is much like any other area with break rooms, time clocks, lockers and rest rooms…but you are under ground in the Magic Kingdom, and that’s part of the excitement! Thia was our favorite part of the tour – seeing the ‘backstage’ area and knowing at one point we were standing directly under the castle! Please note: You are allowed to take photos as you are walking through the park but you are NOT permitted to take photos in any backstage area, including the Utilidors.

From Fantasyland you will head over to Tomorrowland. Once in Tomorrowland you will stop for lunch at Tomorrowland Terrace. Your lunch selection had been chosen by you prior to the tour starting, so you will have a few choices. We had about an hour to eat and rest our feet a bit before heading back out.

I don’t want to give away too many secrets as part of the fun and excitement is being on the tour yourself and experiencing the backstage areas and hearing the behind the scenes stories on how everything was planned and built.

If you are a Disney fan, I highly recommend you try the Keys to the Kingdom Tour! If you are thinking about planning a Walt Disney World vacation, contact me today!