Behind the Scenes Magic

Disney’s Keys to the Kingdom Tour

Each time I go to Walt Disney World my goal is to try something new, either restaurant or attraction, and sometimes even both!  My most recent trip was in February and I had planned six months out what my new experience was going to be for this trip.  I have read quite a bit about the behind the scenes tours that Disney offers and since the utilidors under the Magic Kingdom have always intrigued me, I decided that the Keys to the Kingdom tour was the one that I wanted to try.

The tour is typically offered 3 times a day (8:30, 9:00, and 9:30am), most days, but you will need to call to book so the Cast Member will be able to confirm if your date and time preference is available.  The current listed price is $79.00 per person on top of park admission, but if you pay with a Disney Visa you can get a small discount.  Lunch at Columbia Harbor House is included with the tour, but you pre-order and it is not the full menu that is available in the restaurant.  The tours have a maximum of 20 people with one tour guide for the duration and lasts approximately 5 hours.  Cameras and video equipment are strictly prohibited throughout the entire tour, even “on-stage” in the park, so if you can’t handle that, don’t sign up for this tour.  Our tour guide frequently reminded us to keep our phones and cameras tucked away and if the temptation was too great she was more than happy to hold them for us! 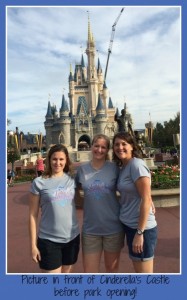 I chose the 9:00am tour time, which allowed us to enter the park prior to scheduled park opening.  We checked in for the tour at City Hall, were given our name badges and then directions as to where to meet up promptly at 9:00am.  We were then told that we could go take photos in front of the castle before the park opens.  I love to get pictures in front of the castle and without a ton of people in the background makes them extra special!  The only negative part of this is that we really wanted some coffee, but the bakery on Main Street doesn’t open early so we had to do without that morning.

A few minutes before 9:00am we could hear the “Good Morning” show winding down at the front of the park and knew that the flood of people would be heading our way any minute.  We made our way back to City Hall and watched as the excited sea of people poured into the park.  That was a pretty fun experience.  I have always been one of those people and I enjoyed watching all of the people rushing in, the smiles on their faces, and the determination to get to their first attraction of the day.  It only lasted a minute or two and then I could see our group forming so we headed over for the introduction and plan for the day.  We were given headsets to wear so that we could hear our guide even when it was crowded and lots of people were around.

We began our tour on Main Street where we were given a brief history of the Magic Kingdom and had details pointed out to us that you may not be aware of.  One fact that stuck with me?  How many U.S. Flags are in the Magic Kingdom?  The answer is one!  There is only one U.S. flag in the entire park and it can be found at the front, where they have the flag retreat with the Veteran of the Day ceremony each day at 5:00pm.  What about those other flags that you see throughout the park?  They aren’t authentic U.S. flags.  They are only banners and are all missing a star or a stripe or something else makes them different so that the rules regarding the display of the American flag don’t have to be observed.

As the tour continued we had the opportunity to ride the Jungle Cruise with a behind the scenes explanation of the mechanics and stories behind the ride.  We also were able to ride The Haunted Mansion after an extensive lesson on how the illusions work and what to look for.  This is definitely not for people who will be disappointed by learning the secret to the magic!  After that we went backstage, behind Splash Mountain to see where all of the floats are stored.  We even caught a peak at one of the new Festival of Fantasy floats which even impressed our tour guide because she said that Disney had been keeping them pretty well hidden during construction.   There was quite a bit more to see backstage, but if you want to know more than this tour is something that you should seriously consider doing!

After lunch we had the opportunity for the much anticipated descent into the utilidors!  The sections that we walked through are the parts that are below Main Street.  All of the hallways are color coded so that the Cast Members know what is above them and there are directions to other sections of the park at every turn.  It is very busy down there and people kept hurrying past us by foot, bicycle, and even golf cart!  I found the utilidors to be very functional.  I can’t even imagine how all of that area would fit above the ground and be as effective as the utilidors.  It gives the Cast Members the ability to stay in character and not cross over into areas that don’t match their costume.  The next time you walk down Main Street, take a moment to think about the busy rush of people below you, working to make sure that the magic continues “upstairs.”

Our tour concluded back where we started, next to City Hall at about 1:00pm.  Our gift for the day was our cute little name badges and a small “Key to the Kingdom” pin.  We had the opportunity to ask final questions, turned in our headsets, and then we were free to continue our day in the park with a new perspective with which to view the “on stage” work, knowing what goes on backstage to keep the magic alive for us all!

Disney destinations are some of my favorite places to vacation! My first visit was to Disneyland in 1980 and I have been hooked ever since. These days I enjoy Disney vacations with my husband, 3 children, and our extended family. Whether traveling with a large group or a small group, young children, or older adults there truly is something for everyone in a Disney destination vacation! I am excited to help you plan your magical vacation! Bridget@themagicforless.com View all posts by Bridget Ratlief

One Reply to “Behind the Scenes Magic- Keys to the Kingdom!”