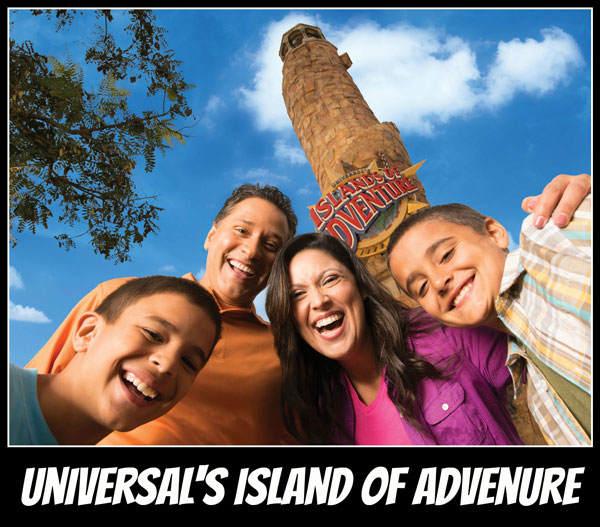 Live the AdventureSM of a Lifetime

Experience innovative attractions that challenge all your senses, from high-speed roller coasters to thrilling 3-D rides. There’s fun and excitement in store for every member of the family at Universal’s Islands of Adventure™…it’s the stuff legends are made of.

Ready to book your Universal Orlando vacation? Book online now and a Magic for Less Travel agent will follow-up to assist with your Universal vacation or request a pricing quote at this link 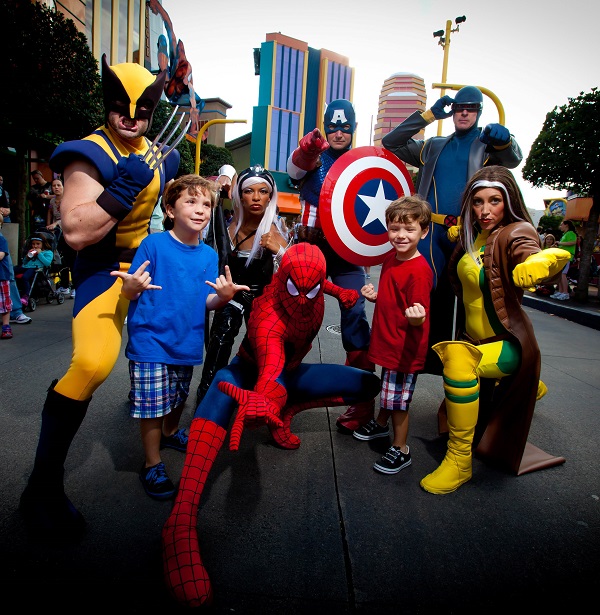 Enter a gleaming comic book city where the world’s greatest Super Heroes pit themselves against the world’s most diabolical Super Villains in the ultimate battle of good versus evil.

The Incredible Hulk Coaster® – Experience a raging, rollercoaster rampage as you transform into the Incredible Hulk. You’ll feel the surge of pure energy when you get blasted through the slingshot gamma ray booster and go from zero to 40 miles per hour in two seconds! Must be 54” or taller

Doctor Doom’s Fearfall® – Doctor Doom’s diabolical new device rockets you 150 feet into the air — then pushes you back down faster than gravity!

Storm Force Accelatron® – Ride with Storm as she faces Magneto. 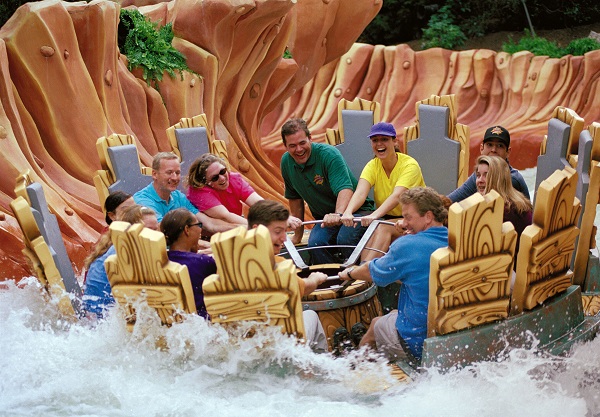 Splash through the panels of your favorite cartoons and comic strips on the wild and wacky water rides of Toon Lagoon at Universal’s Islands of Adventure ™. The Sunday Funnies were never this much fun!

Dudley Do-Right’s Ripsaw Falls® – Hop in a log and hang on in this wild and wet flume ride.

Me Ship, The OliveSM – Kids will have an ocean of fun exploring Popeye’s ship with three levels of interactive fun.

Experience the real Jurassic Park, where dinosaurs have been brought back to co-exist with man for the first time anywhere. At Universal’s Islands of Adventure™ it’s an adventure 65 million years in the making! 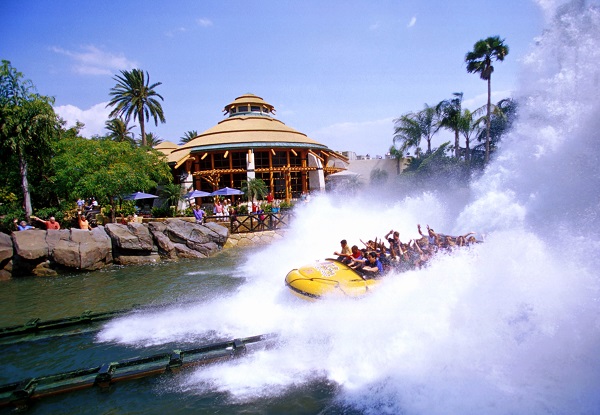 Jurassic Park® River Adventure – It’s lunchtime… and you’re on the menu! Take an unforgettable river raft ride, and see dinosaurs in their natural habitats. But be careful! The fences are down, the Raptors have broken loose, and the only escape from the terrifying jaws of a hungry T-rex is an 85-foot plunge in total darkness! 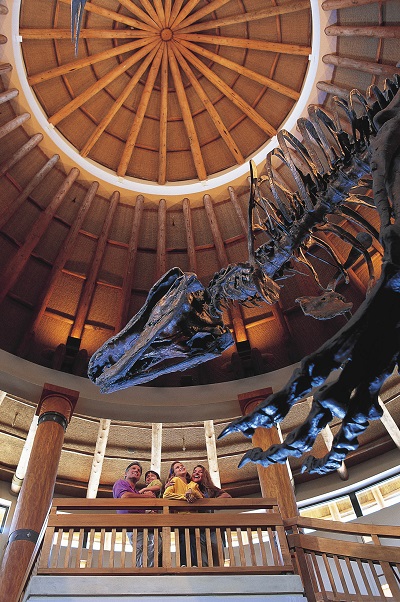 Pteranodon Flyers® – Soar through the air over Camp Jurassic.

Velociraptor Encounter – Daring guests can approach the nearly 9-foot-tall wild velociraptor for a photo. The encounter is located between Camp Jurassic and the Jurassic Park Discovery Center.

Camp Jurassic® – Youngsters can explore secret caves and a mysterious amber mine, clamber through dinosaur capture-nets, play on a variety of themed slides, navigate suspension bridges, make the ground rumble as they pound down on thunder lizard trail, or join in a water-cannon fight in the containment paddocks.

Skull Island: Reign of Kong ™ – (3D) Enter the ruins of a primal realm and journey into the dark heart of an island filled with untold dangers. Vicious, ancient predators and unspeakable monstrosities rip into your crew and swarm from every side. Then, in an act of sheer ferocity—or monstrous bravery—King Kong charges between you and certain doom with an earthshaking fury. With each thundering roar and each chest-pounding thud, one colossal truth comes clear. This is his home, his kingdom. Only he reigns. Must be 36” or taller.

The Wizarding World of Harry Potter™

At Universal’s Islands of Adventure™ you can explore the mysteries of Hogwarts™ castle, visit the shops of Hogsmeade™ and experience pulse-pounding rides and attractions that transport you into a world of magical thrills and excitement.

Here you can pass through the towering Hogwarts™ castle gates and explore the familiar passageways, classrooms, and corridors. Visit the shops of Hogsmeade™ and sample fare from the wizarding world’s best-known establishments, including the Three Broomsticks™ and the Hog’s Head. Plus experience pulse-pounding rides including Hagrids Magical Creatures Motorbike Adventure, Flight of the Hippogriff™, and Harry Potter and the Forbidden Journey™, a state-of-the-art attraction that brings the magic, characters, and stories of Harry Potter to life in ways never before imagined. 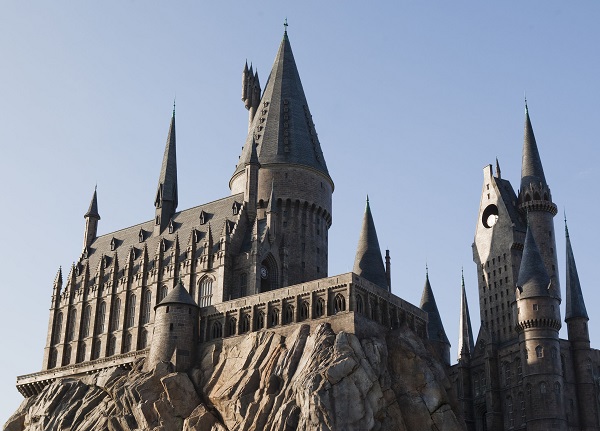 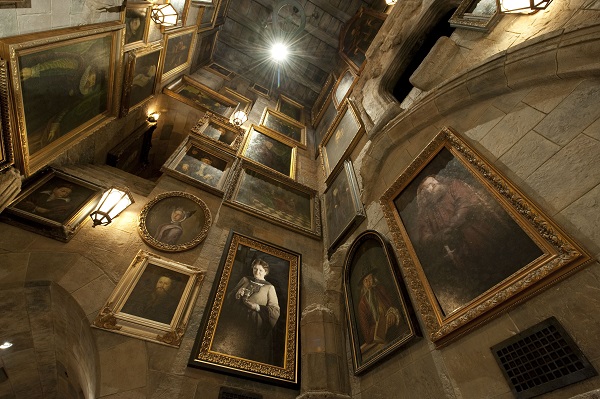 Harry Potter and the Forbidden Journey™ – Make your way through the classrooms and corridors of Hogwarts™. Then soar above the castle grounds on a groundbreaking new ride that lets you join Harry Potter™ and his friends on an unforgettably thrilling adventure. 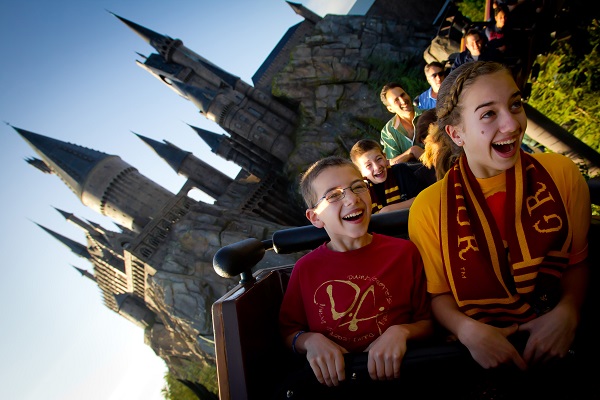 Flight of the Hippogriff™ – Learn the proper way to approach a Hippogriff before you take off on a family-friendly coaster that spirals and dives around the pumpkin patch, and swoops past Hagrid’s hut.

Hogwarts™ Express* – Guests with a Park-to-Park admission ticket can pass through the brick wall onto Platform 9 ¾™, board the train at King’s Cross Station in Universal Studios Florida®, and travel to and from Hogsmeade™ Station in Universal’s Islands of Adventure®, enjoying a different experience each way.

Explore an ageless land of ancient myths and epic legends. From a castle guarded by warring dragons to a battle of titans beneath the sea, heart-pounding adventure awaits around every corner.

Poseidon’s Fury® – Tour the remains of the ancient temple of Poseidon, but be warned: if you go too far, you may never come out!

The Mystic Fountain – Make a wish at this magical fountain in Sindbad’s Village.

The only place where all of Dr. Seuss’ whimsical children’s tales come to life before your eyes! At Universal’s Islands of Adventure It’s a treat for all of your senses…especially your sense of humor! 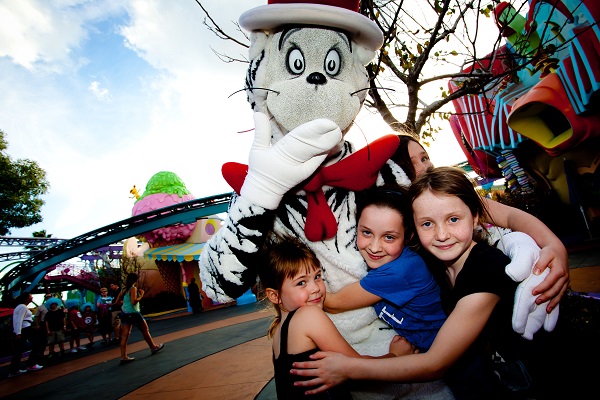 The Cat in the Hat™ – Go for a spin with The Cat In The Hat! Ride your couch through the pages of the famous children’s book and meet the world’s most mischievous cat. You’ll spin and swerve this way and that as that mischievous cat and his friends Thing One™ and Thing Two™ almost bring down the house. You’d better hope things calm down before Mom comes home!

Caro-Seuss-el™ – Merrily go ’round and ’round with a menagerie of colorful Seussian creatures. 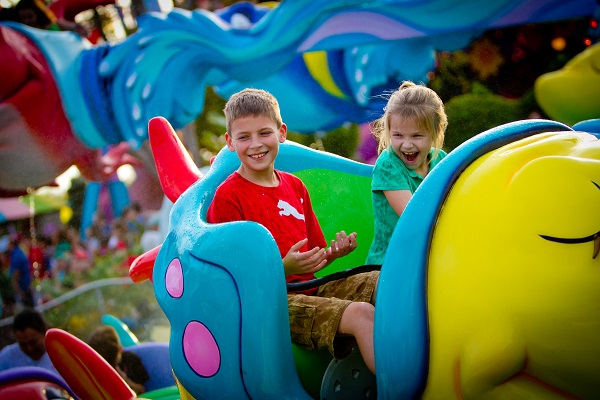 One Fish, Two Fish, Red Fish, Blue Fish™ – Steer your fish through an obstacle course of fountains that squirt in time to a musical rhyme.

If I Ran The Zoo™ – You’ll find the strangest creatures in this interactive play area for kids of all ages. 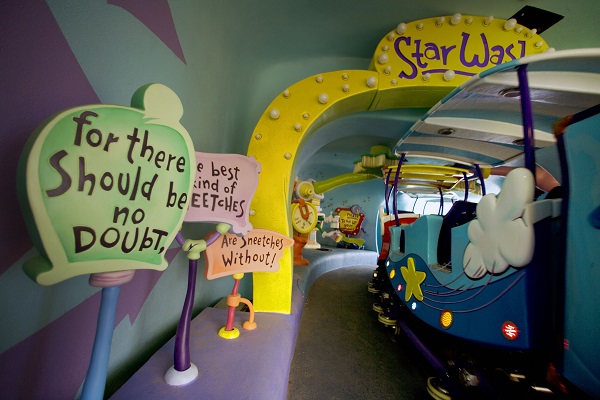 Confisco Grille® – Sandwiches, Burgers and Salads
Hungry for a taste of adventure? Satisfy your appetite at Confisco Grille®, where you’ll find an array of dishes from around the world including Grilled Sandwiches and Burgers, Soup, Salads, Fajitas, Pasta, and a Full Bar.
Hours: Breakfast and Lunch daily
Service Type: Full Service

Croissant Moon Bakery® – Deli Sandwiches, Panini’s, Freshly Baked Pastries
The moon may not be full, but your belly will be after a stop at the Croissant Moon Bakery®. Enjoy savory Deli Sandwiches, Panini’s, Freshly Baked Pastries, and Cheesecakes. A great breakfast stop before your day’s journeys!
Hours: Breakfast, Lunch and Dinner daily
Service Type: Counter Service

Hog’s Head – Burgers
At the rear of the Three Broomstick tavern is the Hog’s Head pub. On the wall behind the bar is a large stuffed hog’s head which periodically snarls at guests. The family can enjoy Harry Potter™ favorites including Butterbeer™, pumpkin juice and other beverages while adults trade stories and sample the pub’s selection of domestic and imported beers, specialty drinks, wine, spirits and mixed drinks.
Service Type: Counter

Blondie’s: Home of the Dagwood – Sandwiches
Nothing tastes better than a gravity-defying sandwich stacked with fresh meats, cheeses, vegetables and dressings. That’s what you get at Blondie’s deli featuring made-to-order Deli Subs and Sandwiches including the famous, piled-high “Dagwood.”
Hours: Lunch and Dinner daily
Service Type: Counter Service